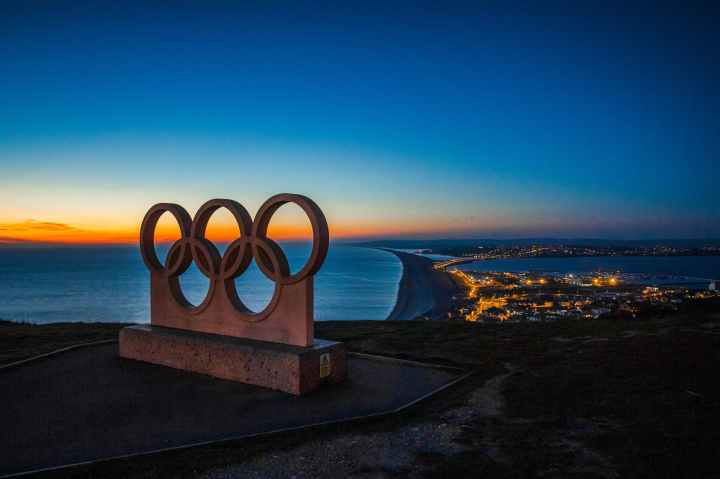 Mountain walks above the clouds; competition day throwbacks; vegan café visits in Cardiff and even the odd face mask selfie – these are just some snapshots featured on the Instagram of one Welsh athlete. And that is literally what it’s all about. Enjoying the outdoors and taking care of your body and your mind – Olympian Jamie Baulch’s life motto.

He may have stepped off the race track but Jamie is as strong and as fit as ever. And, as we all try to get through this pandemic as best we can, he isn’t letting lockdown get him down.

“It’s all about mindset,” the 47-year old told Anna Vitality. “The past six months have been a very testing time for us all, but you have to stay active and create healthy habits.”

Exercising, particularly outdoors, and eating well are key elements to maintaining a healthy lifestyle, especially now in today’s world. But for this champion, on the top podium is quality sleep.

“Sleep is the best form of yoga, meditation, and relaxation for the body. It’s crucial for repair and for recharching ourselves,” said Jamie. “The key to switching off is to also switch those gadgets off!”

Rewind 20 years and there were different things on Jamie’s mind. With places to go and medals to win, it was less about sleep and more about putting in the hours in the gym.

“I was lucky that I could get by on less sleep than the average person. Then, it was all about the graft, working hard and making sacrifices.”

“Beyoncé once said ‘I have 24 hours in the day like everyone else’ and I can totally identify with that,” he said with a chuckle. (How thrilled I was to hear that Queen B’s outlook is valued highly in Jamie’s world, as it is in mine!)

“At the end of the day, we can’t all be Olympians – but what we can be is the best version of ourselves.”

Training took up most of his days during the 90’s. It was a revelation to learn that nutrition, however, took a back seat.

“I was training in such an intense way, I dread to think how many calories I would burn in one single session,” he thought back. “I could eat pretty much anything and it wouldn’t touch me! However, if I knew then what I know now about eating well, who knows, maybe I would’ve performed even better.”

Jamie carried the British flag on a lap of honour after winning the silver medal in the 4 x 400 metres relay event at the 1996 Centennial Olympic Games in Atlanta, Georgia.

“The second world champs in ’97, I should’ve won. I learnt from the mistakes I made though, and they made me better. The next time I raced, I thought ‘I got this’ – I’d left no stone unturned.”

In 1999, Jamie won all five of his competitions at 400m, including taking the gold medal at the World Indoor Championships in Maebashi, Japan and running a best time of 45.60 seconds in Birmingham.

“Psychologically, I’d won the race [in Japan] before I’d started running,” he reminisced. “Confidence exuberated through my body and my mind which got me the gold.”

The highlight of his career was ringing his parents during his lap of honour at the world championship 1999.

“I remember my Dad crying,” he recalled with a lump in his throat. “That was the real gold medal – he supported me, took me to training, bought me my running spikes, and much more – it was my way of paying him back.”

Born in Nottingham but raised by adoptive parents in Risca near Newport, Wales, Jamie opened up about the importance of adoption – expressing how grateful he is to have had such support, love and encouragement from his adoptive parents growing up.

In 2014, the BBC made the TV documentary, Jamie Baulch: Looking For My Birth Mum, which tells the story of how Jamie tracks down and is reunited with his birth mother.

“Talk about trials, tears and tribulations! This [documentary] was a great way to celebrate and show how great adoption can be.”

Coming back to today…

Jamie has very recently started to get back into fitness and is loving doing fasted walks with partner Cheryl, which he describes as a great and invigorating way to start the day.

“Walking early in the morning, before most people are even out of bed, gives a great sense that you’re ahead of the world. Fasted walks are also a great way to utilise your fat stores and you feel more energised for it.”

While in a fasted state, several backup mechanisms kick into action to ensure your muscles and brain get the necessary sugar for fuel. During exercise, after your body’s sugar stores are exhausted, the body then taps into stored fat and turns that into sugar. This has led to the hypothesis that exercising when the body is already “sugar starved” will lead to more rapid fat burning – Harvard Health Publishing

“I feel like my metabolism had slowed so I needed to figure out a way to keep that firing – this is now something that I do almost every day and I feel great for it, physically but also mentally.”

As for nutrition, Jamie’s diet is largely vegetarian – now and again he has fish – while partner Cheryl is (90%) vegan. “It was never a conscious decision to change the way I eat, I just make better choices naturally,” he said. “I don’t like to put a label on my diet – It’s all about being sensible and only consuming what you need. That’s not to say you shouldn’t enjoy food, if I want a glass of wine or some chocolate then I will, but it really is about education and simplicity.”

Jamie is a strong believer in you are what you eat – “If you eat stodgy food, you’re going to feel stodgy!” he emphasised.

“People get so obsessed with diets and fads, but the key to being fit and healthy is making exercise and nutrition simple and enjoyable.” What great advice!

As well as staying fit, being a Dad to two and doing TV work, over the years Jamie has done his fair share of charity work. He has been involved with Welsh children’s hospice charity Ty Hafan and has also done various fundraising for Barnardos, including running the London Marathon in 2011.

Quote of the month

“Take excellent care of the front end of your day, and the rest of your day will pretty much take care of itself. Own your morning. Elevate your life.”

ROBIN SHARMA – THE 5AM CLUB

When you’re running low on veggies and in need of a food shop, this curry is a great solution! 🍛 Made mainly with cupboard supplies, such as rice, chickpeas and nuts, this meal ticks so many boxes...
My latest article has been a joy to write and I’m so excited to share with you guys – keep your eyes peeled as it’ll be going live this evening! www.annavitality.com 👩🏽‍💻🤍
Happy Friday! ✨ So many great questions asked on my story yesterday – hope you found the responses helpful / interesting 🤍
Spring is such a lovely time of the year, especially for working out outdoors! 🌤
Happy Friday all 💜 wishing everyone a restful (hopefully sunny) weekend ahead!
Loving these warmer days ☀️
Loading Comments...
Comment
×